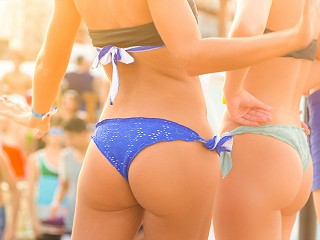 Brazilian Butt Lift, also known as BBL, is one of the fastest growing procedures globally with 60% increase year by year. At the same time, it is probably the most controversial surgical intervention that divided the socio-political landscape, as well as professional plastic surgery societies.

The first issue that springs to mind is the risk of death caused by the accidental fat leakage into the bloodstream blocking the main vessels of the lungs. This risk is quoted to be around 1 in 2500, which drove the British Association of Aesthetic Plastic Surgeons (BAAPS) last year to recommend its members to refrain from performing this operation. These safety concerns were discussed again at BAAPS conference in October 2019 in the light of new scientific evidence. The discussion reflected strong – as well as weak – scientific, socio-political and personal facts, interpretations and opinions.

Right 1: The BAAPS action has raised the public awareness to the risks of this operation and drove the international scientific community to investigate its safety.

Wrong 1: Banning qualified, board certified plastic surgeons from performing a risky operation would potentially drive patients to seek this operation at non-board certified and less trained surgeons in the UK or abroad exposing them to even greater risks.

Solution 1: In the light of new scientific evidence demonstrating mortality risks equal to other cosmetic procedures, national societies of plastic surgery should closely monitor these operations via a national registry and restrict it to accredited trained surgeons and centres.

While most of us in the UK accept someone having an abdominoplasty to correct abdominal saggy skin, or a breast reduction or augmentation, the vast majority firmly rejects the idea of having buttock enhancement surgery. At the same time, there has been a social fascination and media frenzy to grab any headline in support of one view or another.

This procedure faced critical press from the start following exaggerated appearances of celebrities and influencers on mainstream and social media. These exaggerated looks can’t be further than the truth, misrepresenting the vast majority of patients who seek this surgery due to problems with clothing, confidence and relationship, having exhausted all other alternatives.

The current social perception and media interest is probably a driving force for the media headlines grabbing any complication resulting from this surgery, whereas more serious complications and deaths occurring from other standard cosmetic operations, such as abdominoplasty, are almost unheard of.

Right 2: BBL, like any other cosmetic procedure, improves specific quality aspects in life such as clothing, self-esteem, and activities in selected patients.

Solution 2: We should keep an open mind about cultural change in the new era of globalisation and social media.

We, as humans, are probably still oblivious to what this new massive social experiment is about to bring onto us. On a very small scale we may believe we are witnessing a new shift in some perceived aesthetic standards, but on a deeper level we might be facing one of many generational divides beyond our control.

Solution 3: We should study and understand new cultural shifts and trends, free from pre-formed views and prejudices, and must provide the support and advice to the young generation facing unprecedented social challenges.